TL;DR - If you’re just here for a script to set up the emulators, here it is. The rest of this post provides a detailed walkthrough of the setup.

I think it’s safe to say at this point that, as a data engineer, I love working in GCP. I’ve been labeled a fanboy and I’m perfectly fine with that. In my opinion, the developer experience is much better than that of AWS or Azure when it comes to going from absolutely no experience with the platform to Functional ThingTM in very little time. Needless to say, I recommend the platform to many people, especially those working with or building data-driven platforms at fairly large scale that haven’t committed to a public cloud provider.

However, I’m also cheap. Like, really cheap. And running petabyte or even terabyte-scale data pipelines in the cloud can be expensive. I’m definitely not trying to spend a ton of time and money experimenting with a platform I may not even enjoy or that may not work for my use case. If you’re working for an early-stage startup, time and money will be an issue as well.

Thankfully, GCP provides emulators that run entirely on your local machine and (for the most part) work exactly as their expensive, cloud-based counterparts. In this article, we’re going to walk through building a simple streaming pipeline and run it, all without setting up cloud infrastructure or incurring the costs that come with doing so. Our pipeline will involve the following GCP tools:

Before we get too far into this, let’s set expectations. I’m going to make some assumptions, and you know what they say happens when you assume? Your GCP emulators work! So we’re going to assume the following:

Now let’s get to it. With the gcloud SDK, there are a number of components that are installed for you by default and a number of them that aren’t. Typing

will show you what you already have installed and what’s available to install: 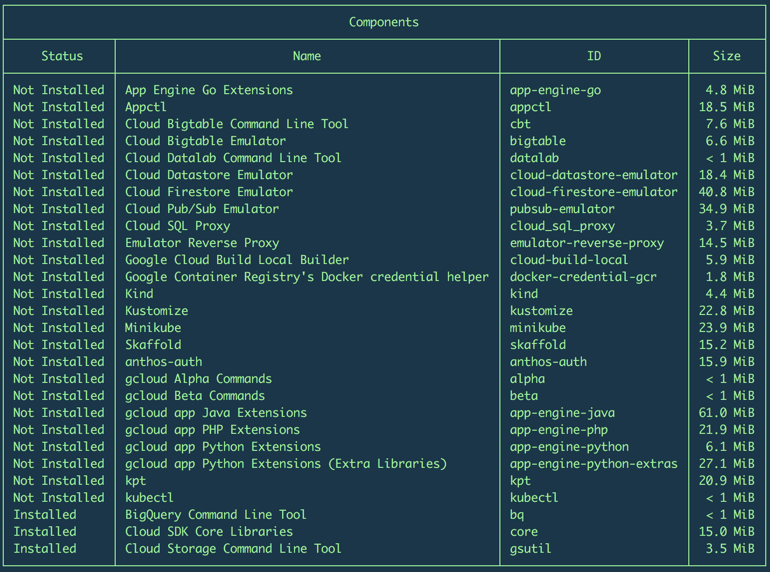 You’ll notice that the emulators we need are available, but not installed. To install them, run the following commands:

You’ll also want to install the cbt command line tool, which we’ll use to interact with our Cloud BigTable instance:

The CLI is nice enough to give you a very detailed list of everything that’s being installed. Just say yes if you want to continue with this walkthrough. Now we can get to the good stuff…

Now that everything is installed, we can spin up the emulators and we’ll start with BigTable. To get started right away, type

PRO TIP: You should probably start the emulator processes in the background. Just add > ~/.cbt_emulator.log 2>&1 & to the end of the above command so you also have a place to see the output. You can kill the background process with kill -9 $(pgrep -f [g]oogle-cloud-sdk/platform/bigtable-emulator/cbtemulator)

The emulator starts up by default listening on port 8086, but you can use the --host-port option to specify a port of your choosing.

Before you can interact with the emulator, you’ll need to do some local environment set up. The first is setting the BIGTABLE_EMULATOR_HOST environment variable, which tells anything hitting the BigTable API to look for the emulator first. The emulator provides a command that will do that for you. Open a new terminal window and type the following command to see it:

and type the following to actually set the environment variable:

The env-init command will use whatever --host-port value you specified when starting the emulator (or the default if you left it out). Now we should be all set to use the BigTable emulator. Next, we’re going to validate that worked using the cbt CLI tool.

PRO TIP: These commands are setting environment variables on the fly, so you’ll want to make sure you’re staying within the same terminal session for the duration of this walkthrough.

This pragmatically named command line tool is a good way to interact with BigTable instances in a simple and straightforward manner. As with most GCP tools, you need to specify at least a project, credentials, and some sort of service-specific identifier, in this case, the BigTable instance ID. One way to do that is with command line options:

Aside from that being a bit verbose, its kind of annoying to have to explicitly set those values with every command. So if you’d like to prolong the life of those Cherry MX blues, you can create a config file in your home directory with these values:

I’m sure at this point you’re thinking, “I’m running this locally…I don’t have a BigTable instance in a GCP project! Why do I need credentials?!” Well…you don’t. For running the BigTable emulator, project, instance, and creds must have a value, but the only property that requires a legitimate value is the instance, which should be set to the host:port that your emulator is running under.

PRO TIP: I tend to leave this config file setup to interact with an emulator. That way, I have to explicitly provide credentials, projects, and instances when touching production environments.

Take it for a spin

I won’t go into an overview of BigTable and how it works in this walkthrough (I’m assuming you’re here because you’re at least somewhat familiar with it), so we’ll just run a few commands to see that our instance is up and running.

Remember we said we were going to build a streaming data pipeline? Well, BigTable will be the final destination for that data, but we need a source, right? Cloud Pub/Sub is an excellent solution for streaming data into GCP and integrates nicely into Apache Beam pipelines. And there’s an emulator! So let’s start it up:

PRO TIP: You should probably start the emulator processes in the background. Just add > ~/.pubsub_emulator.log 2>&1 & to the end of the above command so you also have a place to see the output. You can kill the background process with kill -9 $(pgrep -f [g]oogle-cloud-sdk/platform/pubsub-emulator/lib/cloud-pubsub-emulator)

As with the BigTable emulator, the --project property can be set to any value (but it must be set) and you can specify the port on which your emulator listens if you don’t want to accept the default of 8085.

PRO TIP: If you spin up the Pub/Sub emulator without explicitly setting the --host-port option, and another service is already listening on 8085, the emulator will pick a random port to listen on. That being said, it’s a good idea to explicitly set this value to avoid conflicts, and to prevent accidentally starting multiple emulator instances locally!

Just like we had to set up our environment to tell things looking for BigTable instances to use the emulator, we have to do something similar for Pub/Sub, and there’s a similar command for setting the host as well:

Take it for a spin

There is a nice gcloud command you can use to interact with Pub/Sub…but it doesn’t support interactions with the emulator (there’s always a catch, right?). Since you need to have some code to interact with the emulator, the folks over at Google were nice enough to provide some sample Python code that illustrates all the basic functions (e.g. creating/deleting topics and subscriptions, pushing/pulling to/from topics, etc.). I typically modify this code for my specific use case, but for this example, we’re going to use what’s already there.

I would suggest you pull down Google’s sample Python code, navigate to the publisher.py script and familiarize yourself with what it can do and how it works. You’ll notice a few things are hardcoded (the publish function, for example, will always publish the same messages to your topics if left unmodified), so just be aware of what you might wanna change. I’ve provided my slightly modified version of this script to help make things easier. Regardless of which one you go with, we’re gonna use it as-is, so let’s create a topic:

PRO TIP: If you cloned Google’s repo, don’t forget to follow the steps in the README and install the required Python dependencies and/or activate the virtual environment prior to running the scripts. If you cloned the repo I’ve provided, then my setup script will take care of that for you (among other things).

Well how fancy do you feel now that you have not one, but TWO GCP emulators running?

Now we’ve got a way to get source data into our pipeline locally and we have a place to store it. Let’s get to processing the data with Apache Beam.

In case you aren’t familiar with it, Google Cloud Dataflow is just a runner for Apache Beam. If you’re familiar with Spark, Flink, or even Kafka Streams, working with Beam will feel somewhat familiar. Since we want to run everything locally, we’re going to use the Beam Direct Runner, which won’t give us the fancy UI we get with Dataflow, but we can test our pipeline end-to-end (almost) exactly as it would in Dataflow.

We won’t do a deep dive into Dataflow or Beam, but here’s what you need to know to continue:

In order to get the pipeline going locally, here’s what you’ll need:

Don’t worry…I’ve got you covered. If you haven’t already, just clone this repo, then, if your emulators are still running in the background, run the following to start the pipeline:

If all goes well, you should see this:

PRO TIP: Nothing. That script will run the pipeline process in the background. You can kill the background process with kill -9 $(pgrep -f gcp-local-streaming-example/build/classes/java/main)

That’s it. The log output of the pipeline should be written to ~/.beam_direct_runner.log.

Putting it all together

Assuming you’ve got everything running in the background, you can go back to the publish script we ran earlier to generate some data and it should flow into your local BigTable instance.

Now you can check your table and see a number of rows written:

PRO TIP: NEVER run cbt read against a production instance without limiting the number of rows using some sort of filter (e.g. count, prefix, start/end, etc.). This triggers a table scan which, aside from being painfully slow, could have wider ranging performance impacts on your cluster.

Oh…and as an added bonus for making it this far, I’ve provided this script to run all the setup for this entire walkthrough and get everything started for you. You can run the following and should see output similar to this: 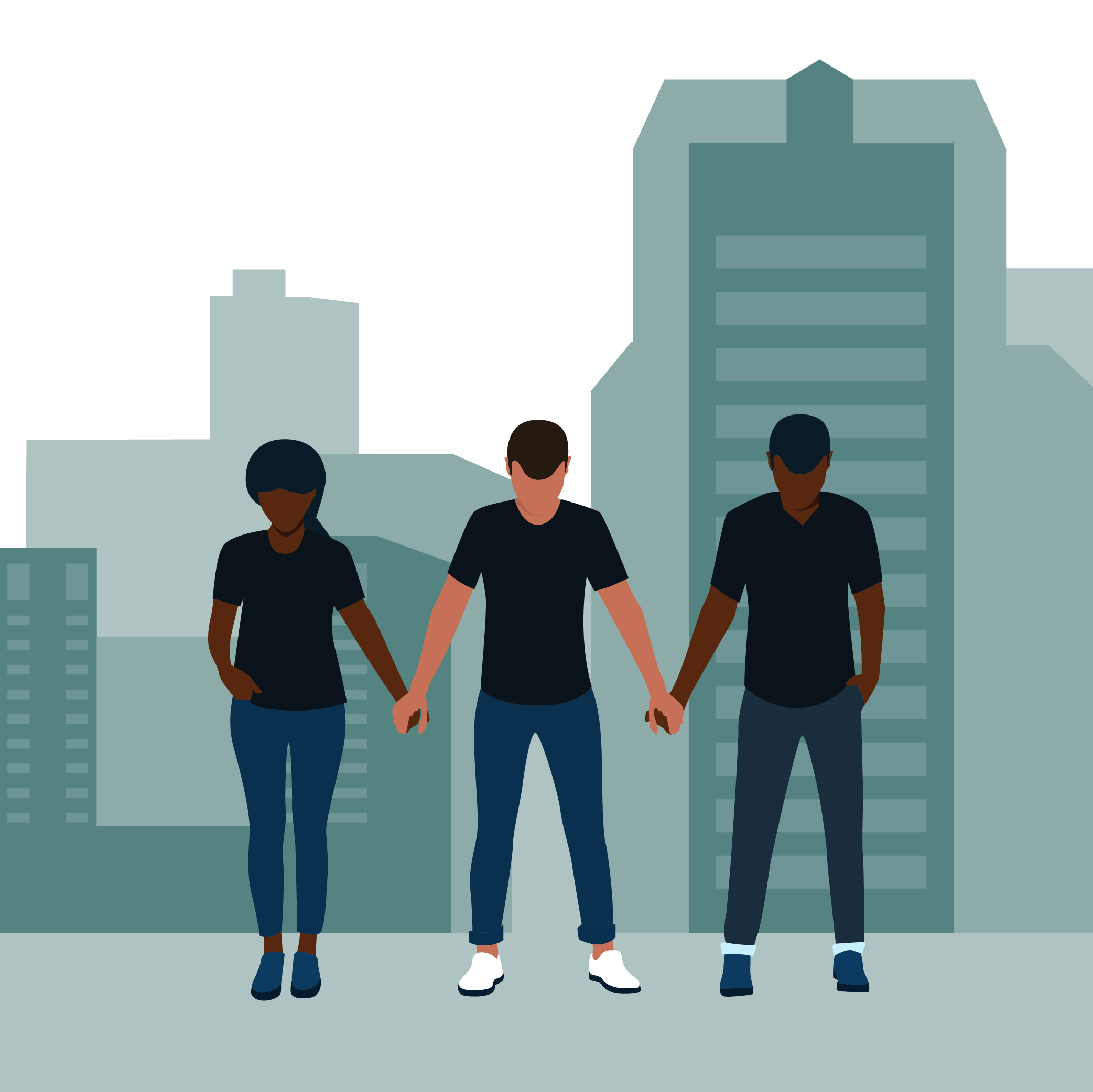 One software engineer’s introduction to the /dev/color A* program 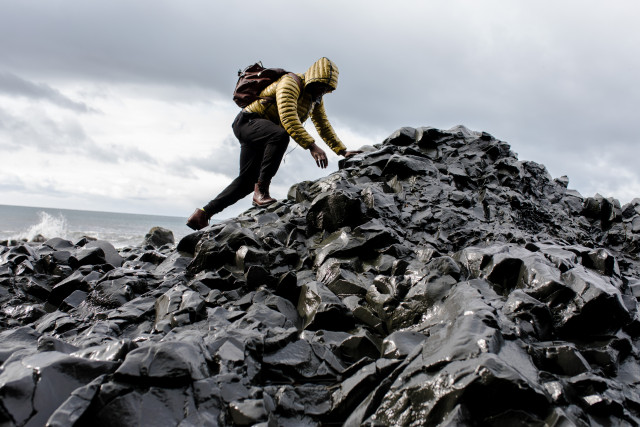 Holla at YABOIS: My never ending battle with impostor syndrome